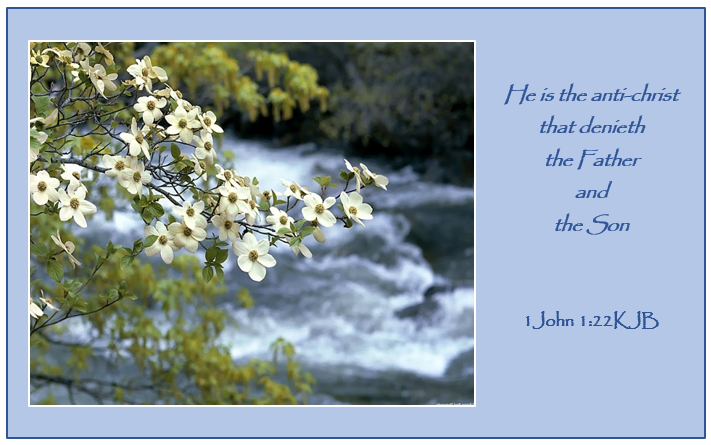 “Who is a liar but he that denieth Jesus is the Christ? He is anti-christ that denieth the Father and the Son” 1John 2:22

The anti-christ. Who is he? Where does he come from? How can we recognize him? The Bible gives us many clues. Anyone who is paying close attention to the Prophecies of the LORD, the Psalms, the Proverbs, and also throughout the New Testament will discover that in this world ways are being paved for the anti-christ. The anti-christ, a celestial power, who will be introduced by satan.

God’s Kingdom is yet to come. For the moment the world is ruled by Lucifer (=Lightbearer), who is God’s adversary. Mankind is under the control and influence of the liar from the beginning. The apostle Paul says that he is the god of this day and age. The Scripture says that he is the prince of darkness. Mankind is giving the existence of Satan the benefit of the doubt or does not believe in his existence altogether. The devil does exist for Jesus Christ did meet him.  He tried to tempt Lord Jesus three times in the desert before He started His Ministry; Satan was rejected by the great  Saviour, Matthew 4:10 “Get thee hence Satan”, Luke 4:8 “Get thee behind me Satan“. You can look these Words up in the modern English bible translations, however,  you will not them find there.

Mankind is speaking of and longing for peace. However, the world is full of chaos, confusion, and (deadly) violence. Mankind was not able to bring peace on earth in almost six thousand years that passed since God’s Creation. It did not make mankind happy the enormous development of technology and science. As a matter of fact things are total out of control and certainly did not bring back the Garden of Eden God once created.

The anti-christ wants mankind to believe that Jesus Christ was a martyr, a great prophet, and died for peace and non-violence. But don’t be mistaken. The Death of Jesus Christ was part of God’s Plan for the Salvation of mankind. Jesus Christ came into this world to die on Calvary’s cross and the Blood That flowed had to flow according to God’s Will. The Blood is the Blood for Atonement (at-one-ment). The Blood of Jesus Christ washes away all sin to those who ask for forgiveness of sin and repent. This was God’s Way to bruise Satan’s head and destroy the work (Genesis 3). God was manifested in the flesh while walking on earth. The Lord  has risen indeed (Luke 24:34). The Resurrection of the Saviour gives the world new hope, new life, Life Eternal for now and the future.

The Kingdom of God on earth will not come gradually. It will not come by the influence of  “christian civilization” nor by missionary- and church work. Nor will it come by the influence of holding up hands, swaying from left to right and calling out all kinds of slogans. The arrival of the Kingdom of God will be revolutionary and very sudden. To put it into today’s words “like a tsunami” It will be all and only God’s Doing.

The second time, the time of the Return of Jesus Christ will with power and great glory, instead of the Child in the manger, instead of the Man of Sorrow. This is the greatest Miracle ever. Do realize you that we as lost sinners can have a true relationship with the Saviour, the King to come? He is Peace, He is Life, is Riches.

“Thy Kingdom come. Thy Will be done in earth as it is Heaven