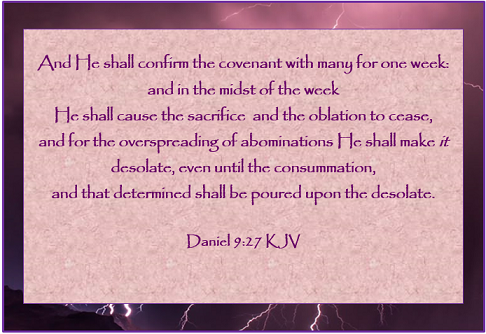 Reformers  William Tyndale, John Calvin, Martin Luther, Ulrich Zwingli, Philip Melanchton,  among others taught that 70th Week of Daniel is fulfilled by the sacrifice of the Blood of Jesus Christ and has nothing to do with the end time to come. However, after the Protestant Reformation the jesuits came with a counter reformation and introducing the deceptive Pre-trib Rapture and the myth of the  70th Week in Daniel.

Are we like Eve claiming in Genesis 3:3 But the fruit of the tree which is in the midst garden, God hath said, Ye shall not eat of it, neither shall you touch it”  But God never did say “neither shall you touch it“ Genesis 2:16,17 And the LORD commanded the man, saying, Of every tree of the garden thou mayest freely eat, But of the tree of the knowledge good and evil, thou shalt not eat of it: for in the day that thou eatest thereof thou shalt surely die

Do we believe God and His grace, Who gave us His Only Begotten Son, Who is warning us that the Rapture will take place before His wrath? And that (great) tribulation  is not wrath?  Or do we believe the devil infested jesuits and the catholic church with blood on their hands and falsely claiming that the Rapture will take place before “the great tribulation” that Pre-trib believers claim and God never did say?

GOD’s PROOF the Seventieth Week in Daniel 9:27 already is fulfilled to perfection. To begin with, the word anti-christ occurs only four in the Bible

The word anti-christ is not mentioned one time in the Book of Daniel. Thus the context of Daniel 9:27 does not relate to the anti-christ , let alone that he will break the covenant with the present state of Israel.

The phrase “confirm the covenant” in Daniel 9:27 relates to the Covenant God made with Abraham and with many and this Covenant is ratified by Lord Jesus when His Blood was flowing for us sinners on Golgotha.    The Seventieth Week is completely fulfilled the moment Jesus Christ called out  “It is finished”, that triumphant Night.

to be continued part 2