The UN Meditation Room is maintained by Lucis Trust formerly Luciferian Publishers of Alice Bailey; she was inspired by Madame Blavatsky.

In the meditation room there is a lodestone altar; the weight 6.5 ton or 13.000 lbs. thirteen words in: 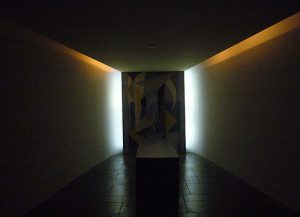 the lodestone altar is pointing to the north.

The lodestone, the cornerstone of the occult is exactly the opposite of our true faith for the truth is that the Cornerstone is Jesus Christ

The Cornerstone vs the lodestone.  God’s adversary is still trying to deliver that what Jesus Christ already fulfilled to perfection. Any one believing on His Name, through grace is privileged to share in His Resurrection. 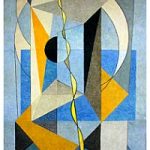 An abstract mural shows a series of patterns that signifies a mutual relation to create a devoted religious “unity of god, earth and time”. In the abstract mural a serpent is climbing up a pole left, of it the all-seeing eye, including several triangles. The message of this painting may very well be The Age of Aquarius the occult character of the UN.

The meditation room is open to the general public in the morning hours (AM) only. In the afternoon hours (PM) when the sunlight has dwindled and only those who are trained in witchcraft and know how to apply the witchcraft doctrine are allowed to enter the meditation room and meditate. In other words only members of the occult illuminati, freemasonry or other  societies with a so called secret.